Call and Order in 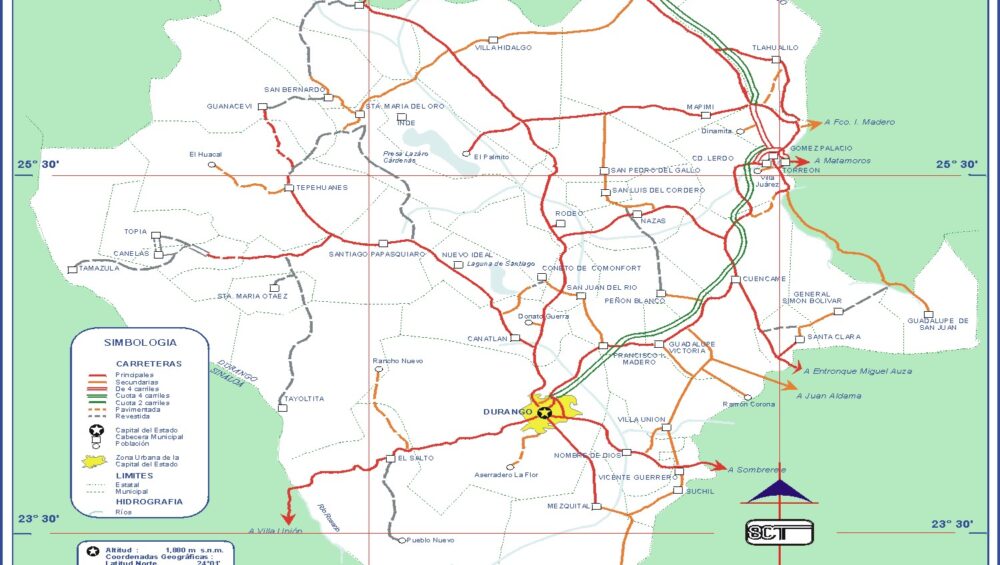 The northwestern Mexican state of Durango, a fantasyland of rugged mountains, pine forests, rivers, lakes, waterfalls, fertile valleys and yucca-strewn desert is perhaps best known as the location for the many movies shot under its startlingly bright blue sky. Because of the diversity of its landscape, Durango has been the setting for films ranging from John Wayne westerns to the story of the atomic bomb.

Today, tourists can walk the streets of Villa del Oeste, a western town built as the backdrop for such movies as Pat Garrett and Billy the Kid, Five Card Stud and other classic westerns, retracing the steps of John Wayne, Kirk Douglas, Burt Lancaster, Lee Marvin, Dennis Hopper and Jack Nicholson, among other luminaries. And after touring the town, horseback riding or watching a show put on by skilled Mexican horsemen, they can eat in the old western saloon that was built as part of the set.

The movie sets, however, are only a small part of what Durango has to offer, which includes outdoor sports such as mountain biking, canoeing, fishing, trekking and rock climbing, all popular with visitors from other parts of Mexico, the U.S. and Europe. There is also ecotourism in an area with a great biodiversity of ecosystems, bird watching (the thick-billed parrot, considered one of the most beautiful parrot species in the world, makes its home in Durango’s conifer forests), archeological sites, hot springs, colonial architecture, museums of local culture and history and, not least, the cuisine. The fourth largest state in Mexico has something for everyone, making it an ideal place for a family vacation, a camping trip or, for the dedicated foodie, an introduction to Durango’s gastronomy.

However, this diversity of vacation possibilities is an aspect of Durango’s cultural history that has evolved with time. Its first inhabitants, members of the nomadic Chichimeca groups, were hunters and gatherers, following a natural alimentary cycle of migration and living on wild fruit, nopales, and a great variety of meat including deer, wild boar, wild turkey, quail and armadillo. There is still a distinct tendency to include game on the duranguense menu, and venado asado, a venison dish, is one of the state’s signature culinary offerings.

These early nomads’ stone axe heads, flints and arrowheads, dating back to 6,000 years BC, have been found in the area of Peñón Blanco, also known as Cerro Blanco, a huge rock outcropping popular with rappelling enthusiasts from all over the world. The present-day inhabitants of this region, besides being known for their warm hospitality to these guest sportsmen, are famous for their gorditas, queso asadero (the northern Mexican melting cheese), and sweets made with the area’s abundant peanut and walnut crops, including rollo de dátil y nuez, a date and nut rolled candy. There is also a unique version of enchiladas in a peanut and almond sauce.

The early acaxiltl and xiximitl inhabitants succumbed to the diseases brought by the Europeans, but the indigenous tepehuanos (o’dam) and rarámuris still occupy parts of Durango. Since their towns and villages were so far apart, food had to be preserved and, after the arrival of the Spaniards, this culinary tradition continued, with the addition of animal products and orchard fruits. Preserves and marmalades of quince, figs and peaches, as well as the native pitahaya, are specialties of Durango. So is the norteño dried meat called machaca. Fortunately, these preserves, including the machaca, can all be brought across the border or the ocean, and make nice gifts.

One of the best of Durango’s regional specialties that fall into the category of preserves is ate (pronounced AH-tay), which is usually translated as “fruit paste” but is more like a hard jelly or a soft gumdrop. In Durango, much of the ate is made the traditional, pre-refrigeration way, by placing it under a wooden frame covered with cheese cloth and leaving it in a dry place to harden, similar to the old-fashioned way of drying fruit. The dessert called ate con queso, fruit paste with cheese, is served all over Mexico.

Durango is also known for its fine chorizo and the cheeses made by its Mennonite communities. Queso chihuahua and queso menonita are made and can be sampled on Mennonite farms such as those found in Nuevo Ideal, an hour and a half north of the state capitol, Victoria de Durango, usually known simply as Durango.

The city itself, at the southern tip of the state, was founded in the 16th century by the Spaniards who came for the area’s rich deposits of iron ore, as well as copper, silver and gold. Because the state is divided by the Western Sierra Madre mountains, with the Mapimi dessert to the east and the Pacific coastal plain to the west (the westerly route over the mountains leads to Mazatlan) a commercial center was especially important to the colonizers, who named Durango after a city of the same name in the Basque region of Spain.

The Cathedral, the Palacio de Gobierno and several other Colonial-era buildings make interesting viewing, as do the museums, including the Museo Temático del Cine, devoted to the state’s movie industry. There are lots of good restaurants here, from mom-and-pop eateries to high-end establishments. The state’s delicious meats and cheeses can be sampled in such casual places as Los Burritos, with a menu of 15 different burrito fillings, including carne adobada with grilled onions, refried beans and cilantro. (The large flour tortillas used to make them are one characteristic of northern Mexican food that sets it apart from southern cooking.) For a more upscale menu and ambience, there is the Pampas restaurant in the Hotel San Jorge, an 18th century building that was once the Royal Treasury building. This spot is carnivores’ heaven, offering twenty-one cuts of some of the tastiest meat northern Mexico has to offer.

Of course, none of these meat dishes existed before the Spaniards arrived, but when they did, they found one of the habitats of the North American buffalo, and soon had cattle grazing on this land. The cattle industry is one of Durango’s most important sources of revenue, and cows and bulls seem to be everywhere there is pastureland, including the Sierra. (We were once delayed for nearly an hour on the Espinazo del Diablo – the “devil’s spine” – the winding mountain route with steep drops on both sides that descends from the mountains down to the coastal plain, stopped by the presence of a mean-looking bull in the middle of the narrow road.) Grilled, roasted, and cooked in soups and stews, beef is one of the mainstays of the state’s cuisine, and it is hard to imagine duranguense food without it.

It is also somewhat difficult to imagine it without the spices, raisins and nuts that the Europeans introduced. Although it is a northern state, Durango is not a border state, and it has managed to retain some of the culinary elements introduced during the colonial era. Gallina borracha, Durango’s version of the ubiquitous “drunken chicken”, is flavored with the very Spanish tastes of sherry, raisins and almonds, as opposed to those using pulque or beer.

After a meal of grilled meat or a rich chicken dish, there may not be room for dessert, so the visitor to Durango might want to try some of its delicious baked goods with morning coffee instead. The state is famous as the birthplace of Pancho Villa, and one of its bakery offerings is called bigotes de Pancho, “Pancho’s moustache.” Being oblong in shape, they do vaguely resemble a moustache and are usually filled with either chocolate or fruit preserves. There are also chocolate and nut cakes, as well as those flavored with either anise or orange.

The state’s fruit liqueurs, especially licor de membrillo, made with quince, are mild and delicious after dinner drinks. Stronger alcoholic beverages include aguardiente de uva, grape whiskey, from the town of Xoconostle, and mescal from Nombre de Dios.

As a vacation spot, Durango has a lot to offer, and as a culinary destination, it reveals more than many people expect. Despite a few famous dishes, much of its cuisine is still little known outside the region, and the following recipes will give you a taste of what Durango has to offer.

Subscribe to the weekly newsletter for all
the latest updates
Taqueria El Alacran © 2022 – Made by IAM DESIGN WORLD.